Home & Synopsis/Status Reports     Purpose & Method  Who was Carl Sharsmith?  Why name a Yosemite feature for Carl?/Origin of Proposal    Which feature should be named for Carl?  How can a feature be named for Carl?  Summary of Supporting Statements       Contacts/Resources Webmaster Search Form

Use of this site means you accept its terms and conditions. 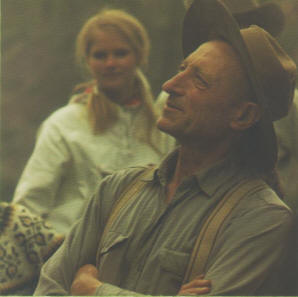 Carl explained in the video Yosemite: the Fate of Heaven that although the brim of his ranger hat was, according to regulation, to be worn level with the landscape, it kept him from seeing Yosemite's vertical scenery! --picture is from cover of Mountain Sage: The Life Story of Carl Sharsmith, Yosemite's Famous Ranger-Naturalist, by Elizabeth Stone O'Neill, used with permission of the author.

For addition to a list of persons and organizations receiving updates and announcements regarding the name4carl proposal, send your e-mail contact information to email or--if you have no internet access--your mail address to Bill Jones, name4carl committee, 0637 Blue Ridge Road, Silverthorne, CO 80498.

Website viewers having contacts with persons in leadership, authoring, art, or other influential roles are encouraged to make them aware of this site and its proposal. This is not to overlook comment from local persons, for such input is also a strong factor in naming decisions. Because the region of informally named Sharsmith Peak is undeveloped, a local community does not exist in the normal sense. Input from visitors to the feature's area, involved researchers, and official staff is especially meaningful, as is that from distant parts of the nation.

You may send original statements and petitions showing your support of the naming to the Name4Carl Committee, to be collected for transmission with others as a package to the federal naming board. Your document should include your name and address and pertinent connection to the proposal, such as involvement with Carl, Yosemite, or nature appreciation and study, an official role, etc.--whatever association will best give context to your support.. Your document may be quoted in part or entirely on this website or in public media. Appropriate submissions will be forwarded to the board and are expected to become part of its public records. For a format you may use and the board's address--click here for a Sample Supporting Statement.

Published articles supporting the naming are also of interest to the board and will be furnished as available as part of the proposal package. If you are aware of same, please forward copies to Bill Jones, with source and date.

Home & Synopsis/Status Reports     Purpose & Method  Who was Carl Sharsmith?  Why name a Yosemite feature for Carl?/Origin of Proposal    Which feature should be named for Carl?  How can a feature be named for Carl?  Summary of Supporting Statements        Contacts/Resources Webmaster  Search Form